With eight band members in total, all lead vocalists in their own right, including a female three piece string section, we go to the minutest details to bring you as close to the originals themselves 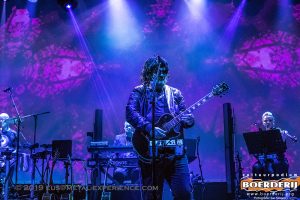 I remember as a kid being mesmerised by the ‘OUT OF THE BLUE’ album cover and in particular the Blue Vinyl. I used to sit with the headphones on and listen night after night reading the lyrics, and getting goosebumps when the thunder said “Ccccoooncerto for a rainy day”

I have been a professional musician all my life playing in local bands, and in 2005 I decided to form ‘The Carpet Crawlers’ Europe’s biggest GENESIS tribute show. We had so much fun learning the material, developing new skills and I also put a hell of a lof of money into building the production side trying to emulate the various stageshows Genesis portrayed.

In 2007 I was contacted by MICK POINTER the founding member and original drummer from MARILLION to sing for his project ‘The MICK POINTER BAND’ performing the early material of Marillion, I was also a huge fan since a kid and this took me all over the World singing music I loved the highlight being performing at the prestigious ‘NIGHT OF THE PROGS’ festival at LORELEY, Germany (where I was later to perform solo)

In 2013, I had a similar dream come true after being headhunted by ‘THE SECURITY PROJECT’ featuring original members of PETER GABRIEL’s band and KING CRIMSON to sing for them covering another hero of mine’s back catalogue. We toured for 3 years together and that took me to the USA and CANADA as well as Europe and was an experience I will never forget.

It was in 2016 when I was playing about with the song ‘Livin Thing’ and recorded a version for fun, and after listening back my Uncle who overheard it said “You should start and ELO tribute show” to which I replied “Oh God! Sounds amazing but a LOT of work!!!”, and then Ray who was in the Crawlers at the time who I knew was a HUGE ELO Fan said the same,…. it circled around in my head for an hour and I decided to go for it and within a few hours after a few calls we had the band!

I had been looking for a new project as I had all this massive production (lighting, sound, special effects, instruments etc.) just sitting there in between Carpet Crawlers tours and this was the perfect choice!

It took a hell of a lot of work deciphering and transcribing the music, it’s not until you break down these stunning songs that you think you have known for years that you truly realise just how good the band were, and how much of a GENIUS Jeff really is!

After what seemed an eternity, we have completed our first shows, and I am SO proud of the family we have and the show we are giving to some of the best music fans in the World and I honestly can’t wait to see where this will take us.

See you all at a show soon!

Brian Cummins is endorsed by 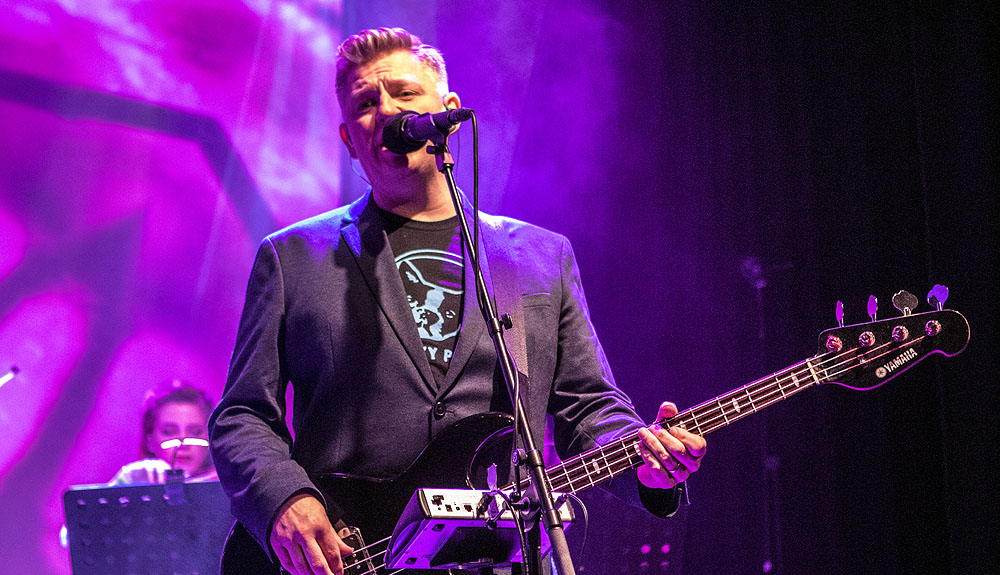 Chris has worked with Brian our band leader for many years and enjoyed touring all over the UK, Europe and Scandinavia with The Carpet Crawlers Genesis tribute. The opportunity to put all of that experience and learning to the test in a new project was one to be jumped at. Chris didn’t realise quite how much ELO music he was familiar with until he began to learn how to play and sing backing vocals on the songs. It has been a wonderful journey of learning the material as well as working with a new group of musicians and technology….. and it keeps on getting better! Chris is plays one of two Yamaha basses and uses a Line 6 pod X3 Live. 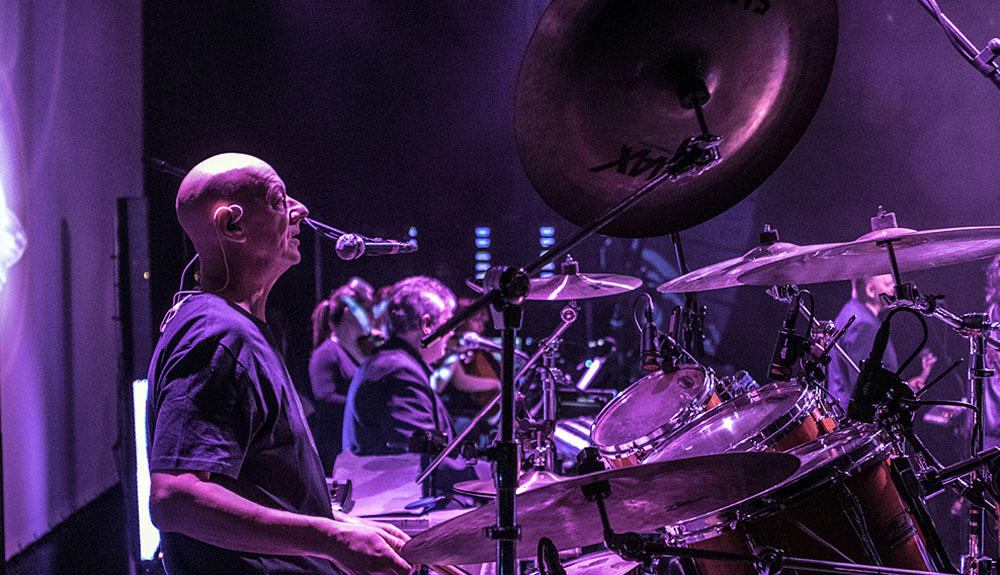 The final link to make up the ‘ELO SHOW rythm section is Dave Orford. Dave has been a pro musician/drummer/backing vocalist and sometimes tutor since the 1980’s. He has played extensively throughout the UK, sharing stages with ; Edwin Starr, Jimmy Ruffin, The Real Thing, Marillion, Icicle Works.

Currently enjoying playing many styles of music with varying bands as a freelance drummer/percussionist, from rock, soul, r n b, pop and country along with some original projects. He recognises the ‘feel’ of Steve Gadd/Jeff Procaro, the ‘creativity’ of Phil Collins, the ‘freedom’ of Dave Weckyl, however, is more influenced by soulful vocalists such as Donny Hathaway, Teddy Pendergrass, Bobby Womack, Stevie Wonder among many, along with 70’s/80’s soul/funk. Deeming it important to love the song and not just the drum parts, enabling him to play sympathetically for the music and the song.

Being a huge fan of melody and strong songs, playing the back catalogue of Jeff Lynne is a perfect fit. He is thrilled to be part of the ELO Show. Being a long standing friend of Brian Cummins for almost 30 years, formerly working together in a Santana tribute band, he jumped at the chance to reunite when Brian offered a position within The ELO Show, and privileged to work with the wonderful musicians included in this band…..

Currently using drums from Pearl, cymbals from Zildjian and drum sticks from Promark.. 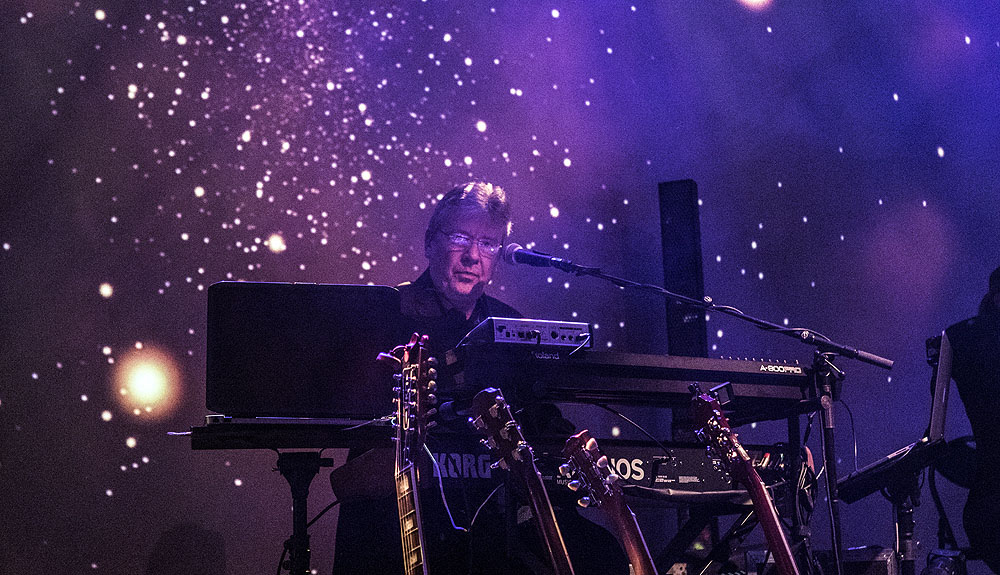 Ray started to play the piano when he was 7 years old and has played keyboards in various cover bands since 1972. Until recently he toured Europe (emulating Tony Banks) with Genesis tribute band Carpet Crawlers along with Brian and Chris.

His greatest musical love is ELO and he has been a massive fan since their first album. In fact he has seen ELO perform live on every UK Tour since their On The Third Day album and has been playing ELO’s amazing music live in various cover bands on and off since 1972.

Ray shook hands with Richard Tandy immediately after the warm up gig for ELO’s 2016 Alone In The Universe Tour and is delighted to be playing his favourite music live with the ELO Show. 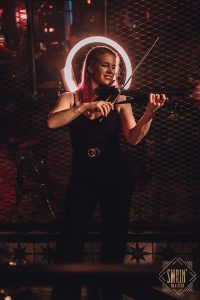 Bianca is standing in for the March, June and July shows covering for Lara who is currently working away on a Cruise ship, but has very much been a fabulous addition to the team. Here’s a bit about her.
I am a freelance violinist based in North Manchester, specialising in chamber music and musical theatre. I also teach privately to any age and standard.
I am a vivacious and experienced chamber musician with a passion for musical theatre and small ensembles. I very much enjoy teaching, as it gives me the opportunity to pass on my knowledge and enthusiasm to anyone who loves music and is willing to learn. I am a recent graduate of the Royal Northern College of Music and now work in and around the Manchester area. I also play viola as a second instrument. 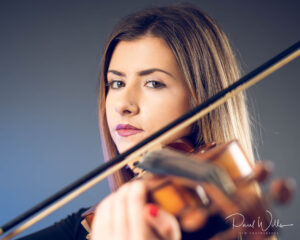 Lara is a freelance violinist/electric violinist based in Liverpool. She graduated from Paul McCartney’s LIPA in 2016 and since then has been involved in lots of musical different projects.

She is currently performing as part of an electric string trio ‘Sapphire Strings’ on board the Carnival Conquest in the Caribbean. One of her career highlight’s includes leading an orchestra in Abbey Road Studios conducted by Nile Rodgers, on a symphonic recording of David Bowie’s ‘Let’s Dance’. She is the founder of Echo Strings, a female string ensemble who play at events and functions across the UK. They perform a residency with the Incredible 11 Hip Hop Orchestra. She also plays violin for Liverpool legends ‘Ian Prowse & Amsterdam’ gigging all over the UK with the band.

Lara got involved in the ELO Show after meeting Kate & Vicky when playing backing strings for Britain’s Got Talents ‘Richard & Adam’. She is a huge fan of Electric Light Orchestra and has loved their music for a long time. She absolutely loves being a part of the ELO Show and having the opportunity to perform such amazing music in exciting venues with talented musicians! 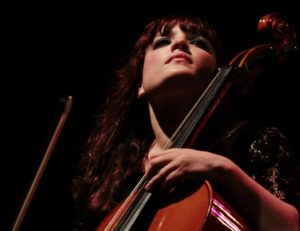 Vicky is a cellist from Liverpool who plays in rock’n’roll band The Mono LPs. She has played for a range of artists including Mick Head, The View and The Christians. Her performance highlights include supporting Status Quo, having national airplay on BBC Radio 2 and ITV, and playing the Pyramid Stage at Glastonbury with Radio 2 favourites The Unthanks. 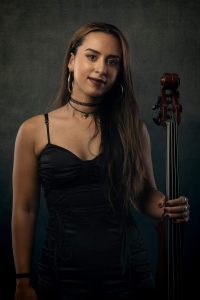 Selena is a classically trained Cellist and started learning the cello age 6 and went on to continue her studies at the Junior Royal Northern College of music age 11 in 2006. Selena was also a member of the Halle Youth Orchestra and was involved in various projects including a ‘side by side’ project with the Halle Orchestra conducted by Sir Mark Elder. She has performed in prestigious venues with the Halle Youth Orchestra including the Bridgewater Hall, the London Royal Opera House and the Manchester Opera House.

Since graduating, in 2017-2018 Selena worked for Princess Cruises as part of an acoustic string trio, she worked on the Caribbean Princess ship in Miami/Caribbean. In 2018 Selena went on tour with the folk/rock band ‘The Wishing Well’ touring around Europe; including many street and different venue concerts. Furthermore, she has recently been working on carnival cruise lines with her electric string group ‘Sapphire string trio’. She also frequently performs at weddings and other events, and she enjoys performing a wide range of different genres especially rock music.

Selena was introduced to the ELO show through the Lara, she was very keen to play in the band as she already loved a couple of the Electric Light Orchestra’s songs. She didn’t realise how many ELO songs she already knew until she went to rehearse with the band back in April and fell in love with many more of the songs. Selena is delighted that Brian has invited her to play at many of the incredible shows and enjoys performing immensely in every show.