Well, we are five shows into this year and already getting some stunning feedback and having the time of our lives!

We played the lovely Parr Hall, in Warrington on Friday, and what a great venue it was. A packed audience featuring some well known musicians (Ian McNabb from the Icicle Works who is a HUGE ELO Fan) being one, and they were so up for it, the noise was deafening at times and the atmosphere electric.

The band is really coming together now and special praise has to be given to BIANCA our new violinist who stepped in for LARA who is currently working away on a Cruise ship sunning herself in the Caribbean. Biance stood in at the TRADING BOUNDARIES and BOERDERIJ shows in March and literally had no rehearsals, in fact we only met her on the day of the gig and she got up on stage and did a fabulous job. She will also be performing at the CUSTOMS HOUSE show in July and then LARA is back in September but I’m sure she will be with us again in the future.

As some of you may know, we filmed and recorded the show in Holland at DE BOERDERIJ with 29 Cameras and it is all getting mixed down and edited as we speak by our band leader Brian, we are hoping to get it out as soon as possible as it looks and sounds fabulous.

Our next shows are at CUSTOMS HOUSE in South Shields in the North East of England, a lovely venue and tickets are flying out so grab them quick as this looks like a sell out.

Then we are at our most ambitious show so far, we are honoured to be playing the LIVERPOOL PHILHARMONIC in our first year as a band, this is one of the most beautiful venues in the UK and tickets again are really starting to sell, so join us for what is proving to be a magical night in the making.

If you are on Facebook please search for our Page THE ELO SHOW where we have loads of interaction with you lovely ELO FANS and there’s tonnes of videos and photos from all the wonderful people who came to the shows, here’s a cracker from Mark Winstanley from Friday’s show. 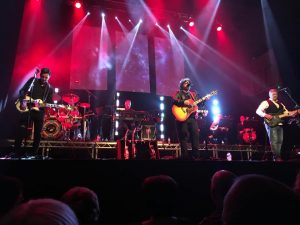 Thanks for reading and please spread the word, we’re hoping to come to a town near you in the future